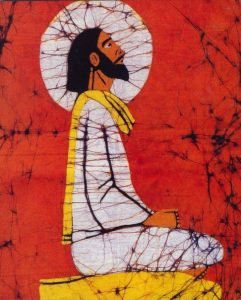 Meditation is at the heart of Christian life.

It is not an eastern import, but rather an ancient Christian discipline.  Its origins are in fourth century Egypt, when many fled the cities for the desert, seeking a purer and more human way of life.

These 'desert mothers and fathers' devoted themselves to prayer, including to the wordless prayer of meditation.  They also studied the art of community, believing purity of heart to be the key to communal life.

One of these seekers, John Cassian, stayed 20 years, learning the lessons of the desert.  Thereafter he went to Marseille, southern France, where he taught both women and men.
He taught a form of mantra prayer:
And so for keeping up a continual recollection of God, this holy formula is to be ever set before you. "O God, make speed to save me: O Lord, make haste to help me." This verse of all verses has been chosen from scripture.  It embraces all the feelings which can be implanted in human nature; it can be adapted to every condition, and to every challenge of life.
Yet, as Cassian believed, the mantra itself gives way to a wordless and imageless state.  This is pure contemplation - unity with God.
Cassian's thought is preserved in The Conferences,  a work which influenced St Benedict some 80 years later.  Thereafter it passed into the whole stream of Western monasticism.
Introduction to Centring Prayer - https://m.youtube.com/watch?v=1aQmQu4lufo
Come along Wednesday evening at 6.00pm for Centring Prayer