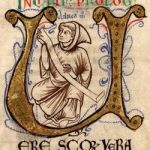 “Come now, beloved, open your heart, and pour into these friendly ears whatsoever you will, and let us accept gracefully the gift of this place, time, and leisure.”

So begins the work On Spiritual Friendship by Aelred, Abbott of Rievaulx from 1147.  Aelred is now rather obscure; his fame seems to have subsided, just as the surging arches and buttresses of Rievaulx have themselves fallen to the earth.  Yet once the abbey was a grand Cistercian house: so perhaps some restoration is in order.

Rievaulx was in Northern England, near

Scotland.  It was one of thirteen English Cistercian houses, which had come forth from the mother house at Citeaux, in France—or, as its Latin name was, Cistercium. The Cistercians had, in the late 11th century, broken away from the Benedictine order, which, they said, had become lax and rich.   They sought to purify their observance of Benedict’s Rule, adding their own short charter—the Charter of Charity (Charta Caritatis), which emphasised manual work, love, prayer, and self-transcendence.

It is not altogether surprising that, in this atmosphere, Aelred turned his literary sights to charity and friendship. The dialogue On Spiritual Friendship was his attempt at synthesising the major reflections on friendship that had come down to him—Marcus Tullius Cicero’s Laelius and St Augustine’s Confessions. And, of course, he added his own reflections on the life of friendship as he lived it in the cloister.

Aelred loved St Augustine’s autobiographical work, The Confessions; and on his deathbed he would purportedly ask for a copy. He, like Augustine, had been young man of the world before his religious turn.  Both of them had been lovers and had taken lovers.  Aelred says,

When I was still [a young man], and the charm of my companions pleased me very much, I gave my whole soul to affection and devoted myself to love amid the ways and vices with which that age is … threatened, so that nothing seemed to me more sweet, nothing more agreeable … than to love.

Yet, as for Augustine too, sex and courtship did not prove emotionally satisfying. Love affairs were a consolation for a short time, and then they were gone; they were attended by loss and heartbreak.  So Aelred set out on a quest for the stable ground of love, a love that abides.  He found it in the cloister—a counter-cultural choice, then as now.  He comes to realise that what he had really sought in his lovers was not any bodily pleasure, but a union of souls.  What he had sought, he says was friendship, amicitia, which is “that virtue by which spirits are bound by ties of love and sweetness, and out of many are made one.”

But do not suppose that Aelred was settling for something less than love.  For him, as for the whole pre-modern tradition, friendship was love and, more than that, was the highest form of love.  To Aelred’s mind the love between a husband and wife was the same as the love between monks in the cloister, or between close friends of all kinds.  All were love; and all were friendship.

He viewed friendship as the goal of life, a quite classical priority. And he quotes Cicero, saying ‘They seem … to take the sun out of the world who take friendship out of life, for we have nothing better from God, nothing more pleasant.’

Friendship is a mixing of souls. But, more particularly, its mark is, Aelred said, the confiding of secrets.

With a friend we confess our failings and, perhaps, make known the progress we have made in the spiritual life. And we empathise with a friend—rejoicing or weeping, as it may be.  A friend, he says, is the guardian of our soul.  And he repeats Cicero’s view that a friend is another self: with a friend can we heighten the joy of prosperity and lessen the sorrow of adversity—by dividing and sharing them.

For Aelred, Christianity is a dispensation of love. Pagan Greek and Rome, he says, had perhaps three or four truly great lovers—Pylades and Orestes, Achilles and Patroclus, and so on.  Yet in Christ there are many: how many sincere, self-sacrifical friendships we find in that creed whose essence is sociality.  So he cites Acts: “And the multitude of believers had but one heart and one soul; neither did anyone possess anything in his own right, but all things were held in common” (4:32).  And he cites the words of Christ in the Gospel of John: “This is my commandment, that you love one another as I have loved you.  Greater love has no one than this, than to lay down his life for his friends”.  (15:12-13)

Christianity is a way of friendship. More than this, we have learnt what the Pagans did not know—that God is the ground of true friendship, for God is love (1 Jn 4:16). God is charity. Deus Caritas est. So, in this dialogue, a young monk asks Aelred:

Ivo: “Shall I say of friendship what John, the friend of Jesus, says of charity: ‘God is friendship’?

Aelred:. “that is strange to the ear, but what is true of charity, I surely do not hesitate to grant to friendship, since ‘he that abides in friendship, abides in God, and God in him.’ (69-70)

God is friendship. Therefore God is the deepest basis of sociality. Here we come to the heart of Aelred’s theology.  God is the bond of all life—of animals, of humans, and of the angels—drawing them into cooperation.  Yet Aelred radicalises this idea still further: God, who is friendship, is the original connectivity between everything, for “even soil, rivers, trees are not alone but thrive in a certain society with their own kind; there is between them ‘a certain love of companionship.’”  (54)

The world was originally ordered to friendship. That is why Adam, in the story of the Garden, could not remain alone; he needed one with whom he could cooperate on equal terms—a friend, like to himself.   So Aelred says “[h]ow beautiful it is that the second human being was taken from the side of the first, so that nature might teach that human beings are equal and, as it were, collateral, and that there is in human affairs neither a superior nor an inferior, a characteristic of true friendship.” (57)

Yet there was a fall into alienation and separation. He says, “with the cooling of love, immoderate desire made secret inroads and caused private good to take precedence over the common good, [corrupting] the splendour of friendship … through avarice and envy” (59)   Humans learnt to say “mine” and “yours”.  And so friendship, which first existed among all, remained only among the few who were good.

Christ is in the realm of the between.  That is why, it seems, Aelred finds a surprising theological significance in a kiss. What can be more between, so to speak, than a kiss?  He says “in a kiss two breaths meet, and are mingled, and are united.  As a result, a certain sweetness of mind is born, which rouses and binds together the affection of those who embrace” (22).

Human love is the way of union with Christ: a “friend cleaving to friend in the spirit of Christ, is made with Christ … one heart and one soul, and so mounting up through degrees of love to friendship with Christ, he is made one spirit with him in one kiss.“ (21)

In our loves we ascend to Christ. But Aelred is not exactly a prophet of free love, as it was understood in the 1960s.  He sees the ascent to Christ as a rising above the physical love that we find in a bodily kiss, to a pure self-transcendence in spirit—to a spiritual kiss.  The spiritual kiss is

“not made by contact of the mouth but by the affection of the heart; not by a meeting of lips but by a mingling of spirits, by the purification of all things in the Spirit of God … I would call this the kiss of Christ, yet he himself does not offer it from his own mouth, but from the mouth of another, breathing upon his lovers that most sacred affection so that there seems to them to be, as it were, one spirit in many bodies.” (26-27)

And, at the final reach of ascent to Christ, there is the intellectual kiss—a strange way of putting it, to our ears at least. But it refers to an unmediated union with Christ at the apex of the soul, which in medieval theology was regarded as the intellect.  “Now,” he says,

“after all earthly affections have been tempered, and all [worldly] thoughts and desires … have been quieted, the soul takes delight in the kiss of Christ alone and rests in his embrace, exulting and exclaiming: ‘His left hand is under my head and his right hand shall embrace me’ [Song 2:6] (28)

This is what Aelred learnt at Rievalux, that school of friendship.[1]

It seems some Christians are so concerned with shoring up the nuclear family that they have taken their eye off the main story of the last century—the crisis of friendship.  We seem to have no time for the sort of deep, confessional friendships of which Aelred speaks.  Our relationships have become fake and transactional.  What happened to free love?  It became consumer capitalism.

In the early 20th century, Carl Jung wrote that “the question of human relationships and the inner cohesion of our society is an urgent one in view of the atomization of … mass [humanity], whose personal relationships are undermined by general mistrust”.  To enable free [people] to survive in a free word society needs a bond between individuals, an affective bond between weak and imperfect people who need each other.  For, “where love stops, power begins, and violence, and terror” (cited in Fiske, Adele Friends and Friendship in the Monastic Tradition, CIDOC 1970.)

In this situation, the way of friendship could be sharply counter-cultural. Might we not say with Aelred that the way to Christ is through the heart of humanity?  Or that God is friendship?  Perhaps we can speak of Christianity as a spiritual humanism, which holds out the possibility of a new kind of society.

And maybe Aelred’s emphasis on friendship could help us overcome some of our contemporary antinomies around sexuality. No doubt much more could be said.

So may God, who is friendship, bind us all together as the Christ of God on earth.

[1] “Among the brothers I found no one whom I did not love, and no one by whom I was not loved. I was filled with a joy that it surpassed all the delights of this world.  I felt, indeed, my spirit transfused into all and the affection of all to have passed into me, so that I could say with the Prophet: “Behold, how good and how pleasant it is for brethren to dwell together in unity.” (82)