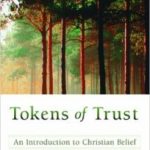 This Creed, recited at every baptism, is the pattern of our trust in God.

I believe in God the Father

Why trust in God? Williams says that it has much to do with longing for a better world. It is a longing for the day of peace and praise (Eph. 1), when all things will be gathered up in Christ: “The world [God] has made is designed to become a reconciled world, a world in which diverse human communities come to share a life together because they share the conviction that God has acted to set them free from fear and guilt.” (8)

Christianity is a longing for the new society, the new sociality, which comes down from heaven. Yet it is more than merely a utopian hope, something even Nietzsche might have understood; it was he, I’m reminded, who said “I love the great despisers, because they are the great worshippers, and arrows of longing for the other shore.” We trust God, the One who is trustworthy; but why we should lean into “God,” rather than, say, an animating social vision is not, it seems to me, altogether clear in this text.

Williams is rather more concerned to deny that this sort of trust is really an infantile wish fulfillment (along the lines of Freud’s Future of an Illusion). No, God is called the Father Almighty not because God exercises unbridled power, but because God is all-encompassing, sustaining all things.

But is trust a striving in darkness, towards a term unknown and mysterious? Perhaps so, and Williams concedes the difficulty of God-talk: we point to an elusive reality. We might be uncertain, or racked with doubt or inner anguish. That is why we trust in those who can see more clearly, those who “take responsibility for God.” They show us a world we’d like to live in. (22)

The rational supports for trust come next, although they are secondary. No one comes to God for intellectual reasons alone, says Williams. The reasons for belief that there is a God are Thomistic (or Aristotelian): God is something like the first mover in a series of dominoes—not a finite object, but a prior activity which sets them all in motion. So Williams says, “God’s action is going on, a sort of white heat at the centre of everything.” (35) Readers might be surprised at this panentheistic note; but it was St Thomas the Angelic Doctor who innovatively called Aristotle’s Prime Mover “Life”–the Life that is through all and in all.

God is not some sort of potentate in the sky, but the Good, who gathers up all things: “I have been trying to suggest the picture of a God whose almighty power is more of a steady swell of loving presence, always there at work in the centre of everything that is….” (44)

This is the old, pre-reformation theism, informed by Plato and Aristotle, which seems to have declined around the fourteenth century. As often, the best thought is both ancient and new.

But how can we talk of God when pain and tragedy seem all too real? We must accept, says Williams, that in a coherent universe “change won’t always be smooth or gradual; there can be cataclysms, ‘violent’ moments when the interactions are explosive.” (40) God makes a risky world. God has provided for the emergence of creatures with mind and freedom; and that involves tremendous risk. (42) Nevertheless, it also opens the possibility of our desiring God: we can descend to the depths, or we can be formed in God’s will, becoming open and available—especially by contemplative practice.

And in Jesus Christ, God’s Son our Lord

For Williams, Jesus is the person supremely transparent and responsive to God.   We find in scripture a picture of one who heals, forgives, welcomes, and announces a new world;  we find “…a human life so shot through with the purposes of God, so transparent to the action of God, that people speak of it as God’s life ‘translated’ into another medium.” (57)  Similarly in a 2005 speech, What is Christianity? (recently issued as a slim volume) he says “Because of the divine authority that [Jesus] shows in his power to teach and to forgive … we say also that the whole of his human life is the direct effect of God’s action working in him at every moment. Some of our teachers have said that his human life is like iron that has been heated in the fire until it has the same power to burn as the fire does.”

Indeed Jesus’ holiness is from all eternity, for it is the responsiveness of the divine Word to God the Father.  Williams says, of the Trinitarian relations, that “God’s living energy is streaming out from him, his mind and purpose, his logos …; and in this energy the world is made. But that living, communicating energy is itself a form of life that is ‘in relation’ with God—in Greek, pros ton theon, literally ‘directed towards God.’ The mind and purpose of God is crystallized in a form of divine existence that is lovingly and faithfully giving back to God what God has poured out. All that it is is God, yet it is God’s loving energy in a new mode, not of giving but of responding.” (67)

Williams turns to the work of Christ.

Jesus reverses “the flow of human self-absorption,” which is our sinful inheritance (original sin).  Jesus breaks the cycle of competition and violence in which the social body is caught. (82-83)  The tragedy is that humanity in general rejects their saviour–and their liberation:  “Jesus, hanging on the cross, says to us, ‘This is what your untruth means: you have been offered unconditional mercy and you turn from it in loathing. You have come to a place where you cannot recognize life itself for what it is. You don’t know the difference between life and death. The reality in you is dead.” (86)

For Williams, Jesus’ healing death may be described in many ways: as a sacrifice, a ransom paid to “kidnappers,” or a punishment we deserve, voluntarily borne by another, who is innocent. (87) Yet none of these is fully adequate; in the end, the Cross is mysterious.  Williams’ comprehensiveness reflects an ancient tolerance.  I am reminded of Gregory of Nazianzus (329-89), who rests content with silence:  “The Father accepts the sacrifice of Christ not because he demands it, still less because he feels some need of it, but in order to carry forward his own purposes for the world.  Humanity had to be brought back to life by the humanity of God.  We had to be summoned to life by his Son.  Let the rest be adored in silence.  Nothing can equal the miracle of my salvation.  A few drops of blood have set free the entire universe.” [3]

For Williams the important thing is that Jesus opens the world to “a future of healing and promise”—to the kingdom of God.  In place of self-absorption, violence, and competition, Jesus offers life together.

He “transforms the whole structure and energy of a shared life” and “transfigures the whole of our nature, what makes us human, what we have in common as people.” (101)

What he brings is a new community, the Church.  That, as we shall see more fully in the next part, is “a pattern of mutual giving and mutual nourishment and mutual dependence.” (102) It is the life of communion, or sharing.  Sharing, he says, is “the newest and the deepest thing about the new world that Easter has brought to birth.” (ibid)

Posted in Blogs and tagged Rowan Williams, Tokens of Trust