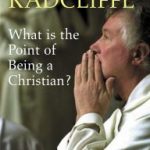 “[t]o be a witness does not consist in engaging in propaganda nor even in stirring people up, but in being a living mystery.  It means to live in such a way that one’s life would make no sense if God did not exist.”

Radcliffe’s work attempts to sound the depths of that mystery.  What gift have we to offer the world?

In the night, when the psalmist is tempted by despair, he sings, ‘Awake, O harp and lyre! I will awake the dawn.” (27) Beauty is closely implicated in hope.  We who are grown old long for the clarity and beauty of God, who is “younger than all else.” (25, citing St Augustine). We long for a quite definitive beauty, even in the midst of a “symbol saturated society”.  And our sacred signs glimmer with the hope of a new order: the Eucharist is an antidote to secular disenchantment.  Radcliffe says:

“Beauty expresses the hope that the pilgrimage of existence does indeed go somewhere, even when we cannot say where and how. Beauty is not icing on the liturgical cake.  It is of its essence.  C.S. Lewis wrote that beauty rouses up the desire for ‘our own far-off country’, the home for which we long and have never seen.” (27)

Beauty is sacramental. It bespeaks a heavenly reality—that place, according to John Donne, where there will be “no noise nor silence but one equal music, no fears nor hopes but one equal possession, no foes no friends but one equal communion and identity, no ends nor beginnings but one equal eternity.”

Yet here we come to a sharp point: so often the aesthetic and the symbolic are trivialised in our churches. If the Church is to offer  hope to the young, says Radcliffe, we need a vast revival of beauty.  Indeed “[m]ost renewals of Christianity have gone with a new aesthetic, whether with plainsong in the Middle Ages, with Baroque music after the Council of Trent, or with Wesley’s Methodist hymns in the late eighteenth century.” (27-28)  Only beauty can penetrate the hopelessness and courseness of the contemporary situation.

Our society is ripe for the message of gospel freedom: this should be at the heart of our evangelization, says Radcliffe (31). And though the liberty of a Christian was a major issue at the Reformation, our liberty has ebbed away.

Morality is not about submission to rules, but about learning freedom. And this, in turn, is about virtue, the strength of character (virtus means ‘strength’) imparted in friendship and civic participation.  That is the older tradition which we find in theologians like Thomas Aquinas.

Freedom is not the freedom to do whatever one wants, whenever one wants.  Rather, freedom is integrating one’s desires in an ultimate concern—the discovery, it seems, of a vision and a social project.  This will bring us single-heartedness and spontaneity.   When we act purposively like this, we act from the core of our being, where God is, sustaining us in existence. (43) Therefore, says Radcliffe, “[t]he Church must offer a pedagogy of freedom which is about more than making the right choices.  It is becoming a moral agent whose life is discovered to have a shape and meaning.” (42)

Again, this is far from freedom as choice maximisation. He says,

“[i]t is usually assumed in our consumer world that the more choices one has, the freer one is. If one can choose between three sorts of beer then one  is freer than if one had just two brands.  But when one has grown into that deeper freedom which is spontaneity, it may become the other way around.  There are just a few deep and fundamental choices to be made, and these are concerned with becoming free and happy in God.  There is one single long-term goal, which shapes one’s life and gives it coherence.  So one has to opt for certain choices because they are simply part of being oneself.” (44-45)

We must learn that finding ourselves in God is not about obeying a whole lot of rules.

The poet puts it nicely:

The astonishment at finding
It possible again to believe

And at finding the space
To breathe and breathe deep

The Church teaches us that our happiness is not in being self-contained, but in “stretching ourselves open to love others”. (51) Radcliffe says that “[w]e flourish in being turned outwards.  Ultimately our happiness is in that which can only be received as a gift, God’s own life. (51) Formally speaking, God is happiness.  Indeed, one of Thomas Aquinas’ innovations was to bring happiness into the heart of theology–something he borrowed from the Greeks (eudaimonia became beatitudo).

Our turning outwards begins in baptism.  We are baptised into a joyful Trinity, for at the heart of God’s life is the mutual delight of the Father in the Son, and the Son in the Father. Radcliffe recites the remarkable words of Eckhart, the fourteenth century German Dominican: “The Father laughs at the Son and the Son laughs at the Father, and the laughter brings forth pleasure and the pleasure brings forth joy, and joy brings forth love.”  Eckhart even describes God’s joy as the exuberance of a horse galloping around a field, kicking its heels in the air.  Indeed, Radcliffe is a master of quite unlikely quotes.

Take this one from Catherine of Sienna: God is “a bed in which we can rest” and “the peaceful sea” (55). These are happy analogies!  Saint Catherine says, “[b]ehave like someone who drinks a lot and who becomes drunk and loses himself, and can’t see himself any more.’ She adds, ‘Let us behave like the drunkard who doesn’t think of himself but only of the wine he has drunk and of the wine that remains to be drunk.’ (59) Such is our joy in Christ.

And such will it be in heaven. This time Radcliffe cites Dominic’s successor, Jordan.  At the wedding feast of the Lamb,

“he will give sweet wine to those whose soul is suffering bitterness through thirst of love; he will wipe up the water of this sad and savourless life and replace it by the holy and fruitful wine, that noble wine, the wine which makes the human heart glad, that wine with whose sweetness the beloved of God are inebriated, I mean the wine of everlasting joy: the rare wine, the new wine which the Son of God, blessed for ever, pours out for his elect at the table of the court of heaven.” (59)