The reign of God means forgiveness – the unbinding from sin and accusation.  Jesus offered the amnesty of God to many whom a moralistic culture regarded as unworthy. 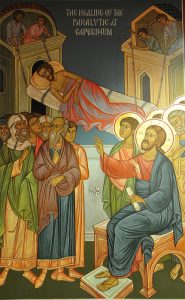 Jesus heals a depressive (a paralytic)

Some thought this blasphemous. (Mk 2:7)

We should not miss the radical criticism of society contained in the act. Hannah Arendt had discerned that this was Jesus’ most endangering action because if a society does not have an apparatus for forgiveness, then its members are fated to live forever with the consequences of any violation. Thus the refusal to forgive sin (or the management of the machinery of forgiveness) amounts to enormous social control. While the claim of Jesus may have been religiously staggering, its threat to the forms of accepted social control was even greater. (Brueggeman, The Prophetic Imagination, p. 85)

Who does our society think is beyond redemption? 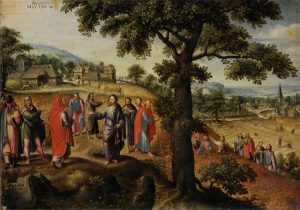 Valckenborch, Christ Defends the Plucking of Ears of Grain on the Sabbath

For Jesus human need is more important than rules.

He healed and reaped grain on the Sabbath day, although that was a day of solemn rest, saying to the devout Pharisees –

The Sabbath was made for humanity!
Humanity was not made for the Sabbath! (Mk 3)

Here Jesus alludes to the ancient meaning of Sabbath as a day for humanity—a day for feasting and the setting aside of social distinctions.  In the Book of Deuteronomy, the command to rest embraces every social class, foreigners, and even the animals: keeping Sabbath is about liberation from the slaveries that bind us.

On the Sabbath Day,

you shall not do any work, neither you, nor your son or daughter, nor your male or female servant, nor your ox, your donkey or any of your animals, nor any foreigner residing in your towns – so that your male and female servants may rest, as you do. Remember that you were slaves in Egypt and that the Lord your God brought you out of there with a mighty hand and an outstretched arm. (Deut. 5). 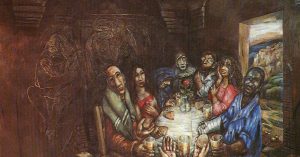 His was a ministry of boundary-crossing, for the sake of our shared humanity.

The outcasts were the product of a legal arrangement that determined what was acceptable and unacceptable, clean and unclean, right and wrong.  Crossing over the barrier of right and wrong implied that in the dispensing of mercy the wrong were as entitled as were the right, and therefore all meaningful distinctions were obliterated. (ibid, p.85) 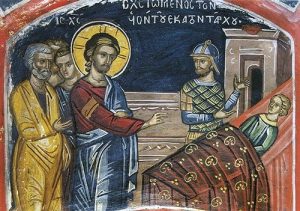 Jesus touched those afflicted by illness, loss, and trauma.

The Dignity of Women 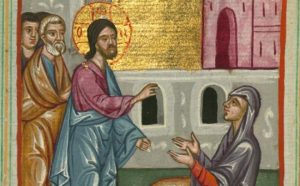 God’s reign—with its healing, eating, and community-building—was not a male enterprise, but an inclusive one.

Jesus associated with women outside his own family, challenging the gender boundaries of the first century. 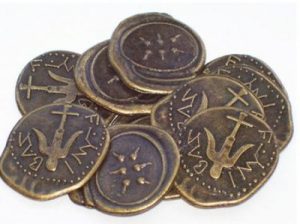 Jesus spoke about issues of political-economy—given the weight of taxes, tithes, tolls, rents, and confiscations on the peasants of Galilee and Judea.

According to Brueggeman, the day-labourers of the parable in Matthew 20:1-16 were, perhaps, peasants who had lost their land from heavy taxation.

And Jesus’ enigmatic saying “render unto Caesar that which is Caesar’s, and to God that which is God’s” (Mark 12:13-17; Luke 20:26) is at least open to the interpretation that he was a tax resister. (ibid)   For what, in the end, belongs to Caesar?  Nothing; and to pay tribute to Caesar, his image graven on a coin after the manner of a God, was surely idolatrous. 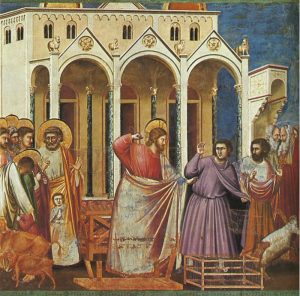 Giotto’s Expulsion of the Money Changers

According to Brueggeman, Jesus’ criticism of the Temple was a criticism of the holiness, the “chosen-ness” of the people Israel, biologically defined—a doctrine that can be traced at least as far back as Isaiah. Jesus advances the critical tradition of Jeremiah against the “royal tradition” of Isaiah. (p. 87)

All these actions, together with Jesus’ other violations of social convention, are a heavy criticism of the “righteousness of the law.”  The regulation of human interaction had become a way for rulers not only to manipulate popular morality but also the valuing of human beings themselves.  As Karl Marx would later see, the law can become a social convention to protect the current distribution of economic and political power.  (Ibid.)  A culture of policing obscured the imperative of mercy and forgiveness.