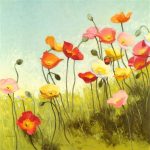 Rejoice and sing now, all the round earth, bright with a glorious splendour, for darkness has been vanquished by our eternal king!

Those are words from the Exultet, which we heard last night as we lit the Easter fire.  It is always wonderful to see, and hear, and smell that fire crackling in darkness.

The resurrection of Jesus Christ still touches a nerve. It is about snatching victory from the jaws of defeat, the totally-unexpected victory of a man condemned by the state and by lawful authority.  God vindicates his Christ against the powers of death.

This is what one writer calls the judo-throw of which, he says, all authentic preaching of the resurrection speaks.  The tables are turned.  The martyred one is victorious! So let the powers tremble, for the martyred of the earth will rise up with him.  The downtrodden of the earth will arise.  Christ goes before them, their liberator.

Hear these words of freedom from an ancient homily for Holy Saturday. The homilist imagines Christ saying:

“Awake, O sleeper, and arise from the dead, and Christ shall give you light. … I command you: Awake, sleeper, I have not made you to be held a prisoner in the underworld. Arise from the dead; I am the life of the dead. Arise, O [human], O work of my hands, arise, you who were fashioned in my image. Rise, let us go hence; for you in me and I in you, together we are one undivided person.”

Easter is the feast of our liberation. When we contemplate the gaze of Christ, let us contemplate our liberation: humanity divinised, humanity triumphant, humanity freed from the powers of darkness.  The martyred Archbishop of San Salvador, Oscar Romero, said:

“Christ arisen has put in history’s womb the beginning of

a new world. To come to Mass on Sunday is to immerse oneself in that beginning, which again becomes present and is celebrated on the altar … . [We who go forth] … have proclaimed the death that saved the world and proclaimed the resurrection of Christ, who lives as [the hope that] all the universe of heavens and earth [might] join together, all things in heaven and on earth … come together in Christ.”

“The Christian knows that Christ has been working in humanity for twenty centuries and that [whoever] is converted to Christ is the new human being [we need] to organise a world according to God’s heart.”

Maybe all this talk of liberation sounds too, too Marxist—but it is not so. Christianity does not seek that sort of liberation; it is not about violent struggle, or class struggle.  Christ on the cross is the man of non-violence.  Nor for that matter is Christianity about an identity politics which would pit one category of person against another: it is about witnessing to the humanity we all share.  It is about witnessing to the humanity that shines in the face of Jesus Christ.

Humanity is still not free. Even we who are rich by world standards, yes, even we must be unbound.  Might it be that we need to start talking in terms of our spiritual poverty?  For isn’t it true that our very wealth has become for us a cause of suffering?  We must learn to speak our present idolatry.

We who are time-poor, or overworked, too tired even for Church—let us contemplate our liberation in the risen Christ.

We who are trapped in debt, or caught in an endless cycle of work and consumption—let us contemplate our liberation.

We who feel we can gain no foothold in a world of extreme technicality and complication, who are no longer useful, let us contemplate our liberation in the face of Christ.

We who feel the crisis of friendship, who are lonely with the loneliness of the city–we who feel unloveable, let us contemplate Christ.

We who are suffering from root-shock, somehow displaced from memory, and story, and place—let us contemplate our liberation.

We who feel the chill wind of Western secularism, fearful for our children, let us contemplate the humanity of Jesus Christ.

Christ arisen has put in history’s womb a new world.  The martyred one is victorious.  Therefore let us take heart, even in a dark night. In the meantime we all have a responsibility to work towards a future fit for human beings; we are all in the business of community building, for Christ is community.  We know that the light of Christ will blaze out among us again, for he is risen!

He is risen indeed, alleluia!

Posted in Sermons and tagged easter