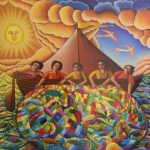 Jesus calls his first disciples on the shores of Lake Gennesseret – fishermen.

This lake, incidentally, is the same lake the other gospel writers call Lake Galilee, or Lake Tiberias.  Yet as I discovered when researching this sermon, the Venerable Bede, that great sixth century saint of the English Church, believed that the name Gennesaret draws attention to a particular feature of this lake—its windiness—and not that only, but its strange capacity to stir up winds all on its own.  This is something he puts down to the crossing and colliding of its waves, which stirs up the wind.  Gennesseret, he says, means in Greek “making a breeze to itself.”

Well, however that may be, it’s in this blustery place that the first disciples make a great catch, unexpectedly, having toiled all night.  Maybe they stayed in the choppy shallows, while all the fish were in the still, dark depths.

Try again! Jesus famously says, and you will catch more than mere fish; you will be fishers of humanity.

Isn’t that what we also are – we who are in the Church, in this ship?  Aren’t we anglers in the great sea of humanity, making trial of the nets?  Sometimes we cast them in the choppy shallows and catch nothing; sometimes the nets sink down and we are surprised at a very great catch.  Although, I must say, there is ever greater anxiety in the church that, though we might toil all night, we have caught little. 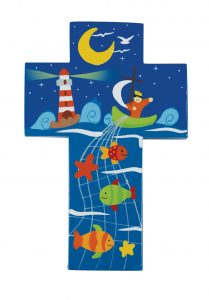 I was dismayed recently to hear the impression of a friend that Christianity has a problem with guilt and shame.  Maybe I spend too much time around liberals, but I thought Jesus was sharply critical of a holiness code which put a huge burden of shame on some, and engendered a hypocritical righteousness in others.  Is the proclamation of the Church really so unfamiliar?

I thought Christianity was about homecoming—about “gathering the outcasts of Israel” (Isa. 56).  Jesus blesses many on the edges of society—women and girls, foreigners, the sick and suffering and, particularly in this gospel of Luke, those who are outside the patriarchal family—eunuchs, a widow, a so-called sinful women (was she a prostitute?).

Jesus appears as a prophet in the tradition of Isaiah:

Do not let the foreigner joined to the Lord say,
“The Lord will surely separate me from his people”;
and do not let the eunuch say,
“I am just a dry tree.”

For to them, says the Lord:

I will give, in my house and within my walls,

a monument and a name
better than sons and daughters;
I will give them an everlasting name
that shall not be cut off.

…These will I bring to my holy mountain,
and make them joyful in my house of prayer;
their burnt offerings and their sacrifices
will be accepted on my altar;
for my house shall be called a house of prayer
for all peoples.  (Isaiah 56)

How can it be, then, that Christianity has a problem with guilt and shame?

How can this situation have developed?

I can only think it has arisen from the fixation, in the Western Church, with the first half of St Paul’s letter to the Romans — and the significant theologies, especially those of St Augustine, which came from it.  And, of course, that missive of Paul’s was at the heart of Reformation debates in the sixteenth century too.

In his letter, Paul speaks of the sinfulness of all humanity and the impossibility of our ever making good the debt.  Can we be surprised if this, stated baldly, is heard as a bitter condemnation?

I believe it’s more important than ever to say that Paul intended it to be a rallying cry against moral perfectionism and moral hypocrisy.  What he says is: all of us suffer a defect of will, so let’s stop kidding ourselves that we are better than other people.   His words are polemical: they take aim at a shallow politics of honour in ancient Israel, and an ethnic exclusivism that would regard foreigners as beyond the pale.  What Paul says is, we are all in the same boat, so there are no grounds to shame anyone as ‘other’.  All of us are just relying on the mercy of God.

It is more than regrettable that some wrench Paul’s thought from its context–even seeming to reduce the gospel to a shaming word.  They play the gospel false.  Can we be surprised if adults reject this?

So we, like the fishermen, find ourselves hauling up empty nets. 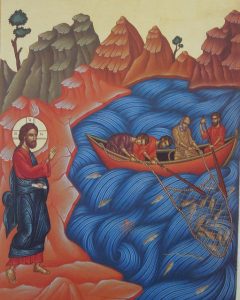 Do we stand in the shoes of Simon who, recognising Jesus’ holiness, says “depart from me, for I am a sinful man!”?

It is this gospel which brings in a great catch.  This is the gospel that resonates with human beings.  Isn’t that what Luke’s Jesus is saying?  And isn’t that what Jesus would say to the Church itself: ours is a gospel of compassion for those who suffer—which, by the way, is all of us at different times and in different ways.  Blessed are you who weep now, for you will laugh!  Ours is a gospel of homecoming for the alienated – something I believe is so important in a time when many people feel loneliness keenly.

If, in the ship of the Church, we find we have toiled all night and caught nothing – perhaps we should launch out into the deep.  We need to a gospel that is right for the times; a gospel that is sensitive to human need, to human suffering.

So let us go into the still, dark depths of humanity and try our nets there.  We might be surprised.

Posted in Sermons and tagged Luke 5