Now about eight days after these sayings he took with him Peter and John and James and went up on the mountain to pray.  As he was praying, the appearance of his face was altered, and his clothing became dazzling white. And behold, two men were talking with him, Moses and Elijah, who appeared in glory and spoke of his departure, which he was about to accomplish at Jerusalem. Now Peter and those who were with him were heavy with sleep, but when they became fully awake they saw his glory and the two men who stood with him.

As the men were parting from him, Peter said to Jesus, “Master, it is good that we are here. Let us make three tents, one for you and one for Moses and one for Elijah”—not knowing what he said. As he was saying these things, a cloud came and overshadowed them, and they were afraid as they entered the cloud. And a voice came out of the cloud, saying, “This is my Son, my Chosen One; listen to him!”

When the voice had spoken, Jesus was found alone. And they kept silent and told no one in those days anything of what they had seen. (Luke 9)

We hear again of the Transfiguration. This is Luke’s telling, of course; and Luke is particular. Luke’s transfiguration seems to be set at night, if only because the disciples cannot keep awake; the other gospels have it in the daytime. Jesus’ clothes became “dazzling white,” we hear, whereas Mark says they become “whiter than any washer on earth could bleach them;” and in Matthew we read that Jesus’ face “shone like the sun, and his clothes with the brightness thereof”. Here are three slightly different literary accounts; but there is one mystical experience behind them all.

We do not need to regard this event in crudely supernatural terms. We do not have to imagine that the voice of God beating literally upon the eardrums of the disciples; I am aware of at least two ancient commentators who considered that the voice of God sounds within, on the ear of the heart. These are mystical experiences. Suddenly the disciples become aware of a strangeness, an allure, a depth-dimension in Jesus; they perceived his true identity as the one so long awaited. Perhaps R.S. Thomas’ poem The Bright Field offers us a way of thinking about the transfiguration.

I have seen the sun break through
to illuminate a small field
for a while, and gone my way
and forgotten it. But that was the pearl
of great price, the one field that had
the treasure in it. I realize now
that I must give all that I have
to possess it. Life is not hurrying
on to a receding future, nor hankering after
an imagined past. It is the turning
aside like Moses to the miracle
of the lit bush, to a brightness
that seemed as transitory as your youth
once, but is the eternity that awaits you.

So shone the glory of God in the face of Jesus.

But one aspect of this story remains elusive. When the disciples perceive the presence of Moses and Elijah, we have a peculiar exchange. Peter says, “Lord, shall I make three tents, one for you, and one for Elijah?” He seems to say it haltingly, nervously—“for he did not know what he was saying.” And suddenly he is cut off, contradicted—“this is my Son, my beloved, listen to him!”

What are we to make of this? I believe the answer is to be found in the Hebrew Scriptures; in the Book of Exodus we read that Moses himself had stood upon a mountain, another mountain, Mount Sinai. Having received the Ten Commandments, he was bathed in God’s glory. In Exodus chapter 24 we read:

You can hear the likeness to the transfiguration, can’t you? God appears as a blaze of fire in great glory. But what happens next? It is very important. In the text God give Moses instructions for building of the Tent of Meeting—and you may know that they are quite elaborate instructions, about for instance the Ark of the Covenant, the Lampstand, the Golden Table. The Tent of Meeting would be God’s dwelling place on earth, in the midst of his people Israel as they journeyed through the desert. Indeed, year by year in the Festival of the Tents (Tabernacles, Booths, or Sukkot) the Jews build tents in commemoration of this wilderness journey, when all Israel were tent-dwellers, gathered around the great tent—the Tent of Meeting. The law and the Tent of Meeting are great symbols of Judaism.

And yet, something new is here. No longer will God’s presence issue from any any tent made by human hands—nor any Temple made of bricks and mortar.  The site of God’s presence on the earth is a flesh and blood human being, the one called the “Son of humanity.”  That is why, I believe, it is not appropriate for Jesus to take his place in a tent, alongside Moses and Elijah.

But it is not announced on the face of the text!  That is surely because it is subversive, and therefore remains hidden. 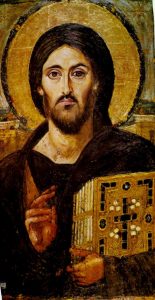 Yet here is a strange thing. Jesus is also the one who goes away, the one who will ascend to heaven. And in Luke’s telling, this mountain top experience anticipates his withdrawal from immediate perception.

So where, then, is God’s dwelling place on the earth? Where is the Temple of God?  Isn’t that the question?

Jesus goes away to become a mystical body, a spiritual body. He is dispersed among all the world—a sacred presence at the heart of humanity, a presence in our own hearts. Jesus is the presence that breaks forth from the sacred table.

I believe that when the disciples look upon the face of Jesus on the mountain, they look as it were in a mirror. They came to realise that they themselves, in their very humanity, flawed as it was, could be a dwelling place of God. They knew themselves to be the body of Christ, a living temple—not made of stones but with flesh and blood. They knew themselves to be the Church not of any nation, but the Church of humanity itself.

All of this seems to shine out of Jesus’ luminous gaze, if we would only contemplate it.

So may we all know that the dwelling place of God is with human beings; and even in our sufferings and uncertainty, know God’s transfiguring presence in our lives.