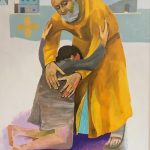 This morning we heard Luke’s great story of compassion, the parable of the Prodigal Son.

But while he was still far off, his father saw [his son] and was filled with compassion; he ran and put his arms around him and kissed him… [He] said to his slaves, ‘Quickly, bring out a robe—the best one—and put it on him; put a ring on his finger and sandals on his feet.  And get the fatted calf and kill it, and let us eat and celebrate; for this son of mine was dead and is alive again; he was lost and is found!’ And they began to celebrate.

This is not just about one man in Palestine, but a portrait of the God who is like a compassionate father.  Christianity has made much of the fatherhood of God – a metaphor for God’s primordial and unknowable nature.  Yet perhaps this reference is more and more liable to be misunderstood, as a projection of male power to the skies – even the worst kind of patriarchal excess. 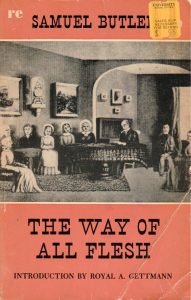 You will know that fatherhood has taken some rather toxic cultural forms. I thought for instance of one Victorian novel, The Way of All Flesh by Samuel Butler, which satirises the puritanical, middle-class fatherhood of the day. George Pontifex is a clergyman, but he still thrashes his children a few times a week, because, says the narrator, it was universally admitted that to spare the rod was to spoil the child, and St Paul had placed disobedience to parents in very ugly company. …

The narrator gives this advice:

Tell your children that they are naughty – much naughtier than most children. Point to the young people of some acquaintances as models of perfection and impress your own children with a deep sense of their own inferiority. You carry so many more guns than they do that they cannot fight you. This is called moral influence….

And hear how religion is used manipulatively to shore up fatherly authority—this time on the lips of the mother: “Papa does not feel that you love him with that fulness and unreserve which would prompt you to have no concealment from him, and to tell him everything freely and fearlessly as your most loving earthly friend next only to your Heavenly Father.”

Yes, it makes you wince; and it is satire. Still, there’s no doubt some Christianity has shored up bad masculinity, from George Pontifex to Matthew Arnold. But for St Luke, God bears little resemblance to the Heavenly Father of nineteenth century puritan imagining. There is no righteous violence here; God is rather a compassionate father. His father saw [his son] and was filled with compassion; he ran and put his arms around him and kissed him. The Father does not insist on his rights at law and seek the younger son’s disinheritance. He simply embraces the Son with a tenderness that could just as well be called maternal.

The spiritual writer Henri Nouwen wrote a book called The Return of the Prodigal Son after being inspired by Rembrandt’s famous painting of the father welcoming home his wayward son. And he proposes three ways into compassionate fatherhood, three ways of drawing nearer to God the Father. 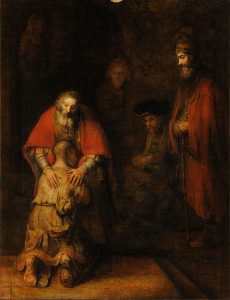 The first is grieving (not cold-heartedness). Grieving, he says, “asks me to allow the sins of the world—my own included—to pierce my heart and make me shed tears, many tears, for them. There is no compassion without many tears. … This grieving is praying. There are so few mourners left in this world. But grief is the discipline of the heart that sees the sin of the world and knows it to be the sorrowful price of freedom, without which love cannot bloom. I am beginning to see that much of praying is grieving.” (129)

Secondly, forgiveness (not retribution). How hard it is! “It demands of me that I step over that wounded part of my heart that feels hurt and wronged and that wants to stay in control and put a few conditions between me and the one whom I am asked to forgive. … Often I have to climb over the wall of arguments and angry feelings that I have [built] … It is a wall of fear of being used or hurt again. It is a wall of pride, and the desire to say in control. But every time that I can step or climb over that wall, I enter into the house where the Father dwells…” (130)

Finally, generosity (not tight-fistedness). The father, says Nouwen, “gives himself away without reserve. … The way the younger son is given robe, ring, and sandals, and welcomes home with a sumptuous celebration, as well as the way the elder son is urged to accept his unique place in his father’s heart and to join his younger brother around the table, make it very clear that all boundaries of patriarchal behaviour are broken through.”

In ways like this we can be people of compassion, near to the Father’s heart.

So you see, far from elevating patriarchy to the skies, the fatherhood of God transforms what it means to be a father in this world: it turns so much conventional culture on its head. We see no righteous violence, but rather an integration of qualities that we might call maternal; and surely this is why we can just as well speak of God as Mother.   Such words are, in the end, symbols for the One in whom we live and move and have our being; the One who is utterly simple, and beyond every dualism.

So may we all grow into the maturity of compassion, our spiritual fatherhood (or motherhood) seeking out the lost who are part of our very selves.