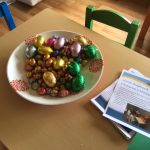 Thomas doubts. I will not trust, he says, until I see the mark of the nails in Jesus’ hands; I will not trust until I can touch those wounds.   And in this story Jesus appears to Thomas, to his sight and to his touch, only to say that he had it the wrong way round.

Jesus says, in effect: first trust, if you would encounter me.  First trust.

Hear what one third century theologian says: When Jesus rose “…all those who formerly saw him could not look upon him, as he no longer had anything about him that could be seen by the multitude” [Origen, Contra Celsum II.64]

And Jesus “appeared after the resurrection not to all people but only to those whom he perceived to have obtained eyes which had the capacity to see his resurrection.” [ibid II.65]

Jesus is no longer in the world as he had been. And in today’s gospel we hear him saying to Thomas, if you would see me, trust.

Perhaps this comes as a surprise.

The nature of our Lord’s risen body has often been contentious. Maybe you will remember the Bishop of Durham who was hung out to dry in the 1980s for apparently comparing the resurrection to “a conjuring trick with bones.”  Two days after his consecration, parts of York Minster were damaged by lightning.  Was it divine retribution? the newspapers agonised.  (Qv. David Jenkins’ autobiography for an account: The Calling of a Cuckoo)  And these disputes have kept firing up through the years.

You might be forgiven for thinking that these disagreements never arose before the late twentieth century. But it is not so.  The mature teaching of the Church, as it came to be formulated by Thomas Aquinas, was an attempt to tread a middle path between those who wanted a sheer physical resurrection and those who thought that the risen Jesus was something like wind or air—something like a ghost (these views were held by the sixth century Bishop of Constantinople, Eutychius).

Yes, he says, Jesus rose in flesh and blood, but he is no longer seen by the light of the sun—but by the light of God, God’s glory. It is as if he exists at a higher frequency. Therefore he is not seen continuously and by ordinary sight, like anything else in the world, but appears at will—and just as quickly disappears. He emerges from hiddenness and retreats into hiddenness.

Yes, he rises in flesh and blood, but is transparent to divinity in a new way. And that means he is able to become utterly permeable, able even to pass through walls, and just as readily offer himself to touch. Touch me and see, he says to Thomas.  [Summa Theologiae Supplementum, Q 83, also III, Q.54.  Aquinas also held that Jesus could move through space instantaneously; he had the gift of “agility”.]

That is what Aquinas thought about the resurrection body, and the crucial point is that Jesus appears not to everyone, but to whomever he wishes.

And in today’s gospel text we hear Jesus effectively saying to the doubting Thomas—if you would encounter me, first trust.

First trust. It is important also to say that Jesus’ resurrection was not some event in the distant past, but is now. Jesus appears still to the faithful, for it is they who have eyes to see the divine glory.  We can, in our better moments, see into a depth-dimension, beyond ordinary seeing.

But where exactly do we see the risen Lord?   I remember at St John’s Cathedral a few years ago, I was deacon of the Mass with the Rev’d Dr Mervyn Lander.  It was a grand occasion, as you can imagine, with the choir and organ; in the middle of it all, a bearded, weather-beaten, homeless man walked right down the nave and sat in the front pew.  Mervyn, I’m sure he won’t mind my saying, whispered in my ear: Jesus has entered the building.  And so perhaps it was.

Jesus appears to the eyes of faith under many guises. Few people realise that the appearance of Jesus at the Eucharist, under the forms of bread and wine, is itself a resurrection appearance.  Here Jesus is really present.  But the cynic will not see it.

Jesus appears to us in many signs—not only in the two sacraments and the five ‘commonly called sacraments,’ but wherever there is self-sacrificial love. He appears in our midst saying “peace be with you” and “receive the Holy Spirit”.  He breathes this Spirit into the Church, breathing in an atmosphere of love, of charity.

And for the Apostle Paul, too, the risen Christ animates the Church: he bestows spiritual gifts on each of us; he calls us to be the new humanity—each of us fully ourselves, but also living fully into the community.   He calls us to reconciliation one with another, to lay aside petty differences of gender or ethnicity or social class.

Christ, whose glory fills the skies,

Christ, the true and only Light,

triumph o’er the shade of night;

Day-spring from on high, be near;